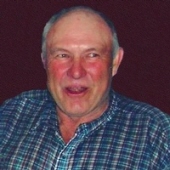 Willard George Wegener, age 76, of Bear Lake, passed away peacefully on Wednesday, July 25, 2018 at GreenTree Nursing Home in Clintonville, with family by his side. Willard was born on February 12, 1942, in the Township of Royalton to the late George and Jenette (Spiegelberg) Wegener. Willard served in the US Army from 1967-1968, when he was honorably discharged to return home to help his mother on the family farm following his father’s sudden illness. He ran the family farm for many years. During those years, he was also employed at Manawa Pump & Well and Trailette Manufacturing in Manawa. Willard was then employed at Speigelberg Implements and for Charlie Koelblock before working at Hintzke Well Drilling in New London, where he retired. Willard enjoyed hunting, fishing and picking berries. He always shared his bounty! He was an extremely giving person with a big heart. Willard is survived by his daughters, Dawn (Neil) Papendorf and Tina (Mark) Mittelsteadt and grandchildren, Nathan Papendorf, Heather (Brian) Boyle, Hannah (Brian) Harper, Marleah (Tim) Knighton, Steven Papendorf, Adam Mittelsteadt and Kayla Mittelsteadt. He is further survived by numerous nieces, nephews, other relatives and friends. Willard was preceded in death by his parents; brother Fred Wegener and infant brother. A gathering of family and friends will take place on Monday, July 30, 2018 from 12:00-2:00 p.m. at Cline Hanson Dahlke Funeral Home in Manawa. Burial will be in Little Wolf Cemetery, Township of Little Wolf. Full military honors will be held. In lieu of flowers a memorial fund has been established.

Cline-Hanson-Dahlke -Manawa
To order memorial trees or send flowers to the family in memory of Willard George Wegener, please visit our flower store.