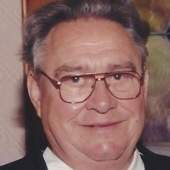 Wilbur G. Robison died March 24th 2016. Born on April 7th 1931 in Des Moines Iowa to Mike and Cora (Pond) Robison. He served his country in The United States Marines Corps during Korean conflict. He trained as an aviation mechanic. Wilbur married Sylvia Duvall on August 7th 1954 they were together for 62 years. They resided in Poplar Grove Illinois, where they raised three daughters. He was a member of North Boone Fire District #3. He served on the village board and was president of Boone Co. Conservation Council. He retired after 30 plus years at Sundstrand Aviation in Rockford Illinois. They retired in 1989 to Pelican Lake Wisconsin where he was active in Pelican Lake Property Assoc. He considered himself a friend of the animals in the wood. He was an avid storyteller and hunter. Survived by wife Sylvia of Weyauwega; daughters: Maryann (fiancé Bart Maddrell) of Janesville, Diann (Fred) Pribbernow, and Doris Robison of Weyauwega. Further survived granddaughter Kelly Bensing of Weyauwega. Sisters: Joyce Helser of Pelican Lake, Virginia Bergman of Rhinelander; sister in law: Shirley Robison of Pelican Lake; also many nieces and nephews. He was preceded in death by his parents, brother Leon and sister Eileen, brothers in law Rudy Helser and LaVerne Bergman. A Celebration of life service will be held at a later date at Enterprise Wisconsin, with burial at Enterprise Cemetery.

To order memorial trees or send flowers to the family in memory of Wilbur G. Robison, please visit our flower store.