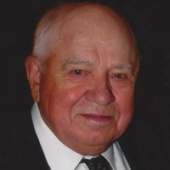 Walter Alfred Pethke, age 88 of Manawa, passed away March 3, 2019 at the Manawa Community Nursing Center. Walter was born in the Town of Union to the late William and Anna (Dallmann) Pethke on May 6, 1930. He was united in marriage to Elaine (Bestul) on October 23, 1954 at Our Saviors Lutheran Church in Iola.

Walter attended school at the Little Mountain School in the Town of Union. He was a farmer all his life. His hobbies included the following, playing Sheepshead, softball, hunting, fishing, camping and woodworking. Walter was a member of St. Mark's Lutheran Church in Symco.

The family would like to give a special Thank You to the staff of the Manawa Community Nursing Center for their compassionate care for Walter during his short stay. And Thank You to Pastor Smiles. The family would also like to thank daughter in-law "nurse" Bonny for her daily stops to check in on Walter and constant care.

St. Mark Lutheran Church
To order memorial trees or send flowers to the family in memory of Walter A. Pethke, please visit our flower store.