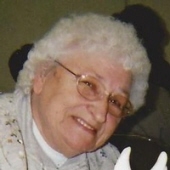 Virginia Sager, age 89, of Manawa, went to her heavenly home on Friday, January 5, 2018 at the Manawa Community Nursing Center. She was born on September 5, 1928 in New London, daughter of the late Harry and Sadie (Bodway) Stich. In 1948, she was united in marriage to Duane Sager. He preceded her in death in 1980. Ginny was employed at Curtis Company and Hillshire Farm both in New London for many years. She enjoyed puzzles, crocheting, playing cards and going to music festivals.

She was preceded in death by her parents and husband, sister Ramona (Edward) Klingert, and a son-in-law Vance Cady.

The family would like to thank the nurses and staff at Manawa Community Nursing Center for the sincere, tender care and compassion shown Ginny.

To order memorial trees or send flowers to the family in memory of Virginia 'Ginny' Sager, please visit our flower store.