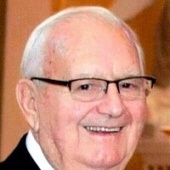 Victor “Vic” A. Loibl, age 88 of Weyauwega, passed away on Sunday, June 27, 2021. He was born on February 7, 1933 to Math and Rose Loibl in Boyd, Wisconsin. He was married to Corrine Eslinger on April 12, 1955 at Sacred Heart Catholic Church in Edson, Wisconsin and they enjoyed 66 fun-filled years together.

He was drafted into the US Army in 1956 and was stationed in Germany for 8 months where Corrine joined him. They also went on a tour of beautiful Switzerland while they were there.

Vic was a member of the Lions Club for 30 years in Boyd and 20 years in Weyauwega, holding the office of president at both places. The Weyauwega branch of Ducks Unlimited was started in his basement.

Vic was a Cubmaster in Boyd in his younger years and played Fast Pitch softball. He loved hunting, fishing and golfing, especially hunting at his Ponderosa Hunting Cabin near Boyd. Vic and Corrine owned a cottage on Mead Lake for 20 years and enjoyed many good times there with family and friends. He was a member of the Weyauwega Golf course for 30 years. He was an usher at the Catholic Church for 60 years. Vic enjoyed attending the grandchildren’s school and sporting events, which he seldom missed, and watching the Packers, Badgers and Brewers play ball.

Vic was preceded in death by his parents and his brother Edward Loibl.

The Funeral Mass for Vic will be held Thursday, July 1, 2021 at 11:00 am at Ss. Peter and Paul Catholic Church in Weyauwega with Fr. Matthew Rappl officiating. A visitation will be held at the church from 9:00 am until the time of the service. Burial will be in Oakwood Cemetery, Weyauwega.