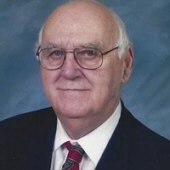 Victor Richard Henry Struck, age 94, of Weyauwega, formerly of Manawa, passed away on Saturday, April 15, 2017. Victor was born on December 3, 1922, in the Town of Wolf River (Winnebago County), the son of the late Henry and Renate (Pagel) Struck. He was confirmed at Christ Lutheran Church West Bloomfield. On December 19, 1943, he married LaRue Tesch at Christ Lutheran Church. Victor was successful in many endeavors. He was a dairy farmer, did custom work for other farmers, raised broiler chickens- 8000 at a time and drove school bus. Victor was very active in his church, St. Paul's Lutheran Church in Manawa. He was custodian for many years and also represented his congregation and circuit as a voting delegate at two annual synod conventions, one in New Orleans and one in Anaheim, California. When Victor heard that Manawa Floral was for sale, he decided to try another occupation. With help of floral books and Mr. Elmhorst, the former owner, Vic became very successful as a floral designer and growing plants for the greenhouse. After retirement, Victor and LaRue were able to travel on several bus tours. LaRue passed away on September 11, 1999. They were married 56 years. Victor married Luella Schuelke on November 8, 2000, at St. Peter Lutheran Church in Weyauwega. Luella passed away on March 14, 2005. Victor married Nancy Timm on December 3, 2005, at St. Paul's Lutheran Church in Manawa.

The funeral for Victor will be 11:30 a.m. on Friday, April 21, 2017 at St. Paul's Lutheran Church in Manawa. Pastor Nathan Reichle will be officiating. Visitation will take place on Thursday, April 20, 2017 from 5-7 p.m. at Cline Hanson Dahlke Funeral Home in Manawa and also from 10:30 a.m. at the church until the time of service on Friday. Burial will be in Little Wolf Cemetery, Town of Little Wolf.

In lieu of flowers donations may be made to St. Paul's Vision 2000 fund.

To order memorial trees or send flowers to the family in memory of Victor Richard Henry Struck, please visit our flower store.