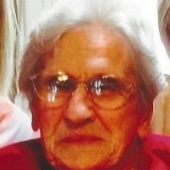 Veronica A. Avgerinos, age 92, of Weyauwega, passed away on Friday, September 15, 2017 at her residence. She was born on January 13, 1925 in Chicago, IL, daughter of the late Joseph and Hildur O'Dea. Veronica was a homemaker raising eight children. She went to work at age 50 at the Continental Bank in downtown Chicago. She enjoyed Bingo and cards.

Besides her parents, a daughter Denise Avgerinos and a son George Avgerinos preceded her in death.

A memorial service for Veronica will be held in Illinois.

To order memorial trees or send flowers to the family in memory of Veronica A. Avgerinos, please visit our flower store.