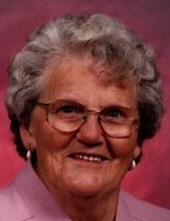 God has her in his keeping and we have her in our hearts forever. Verna Mabel Thiel, age 101, of Weyauwega, Wisconsin passed peacefully to her heavenly reward on August 25, 2021. A beloved wife, mother, grandmother, great grandmother and great great grandmother, she will be terribly missed by her surviving family as well as the many, many friends she made over her long life in Waupaca County.

Verna was born on February 27, 1920 in the Town of Royalton as the oldest child of Ella and Harry Kapitzke. She grew up in the Town of Royalton with four other siblings on a small homestead near White Lake. On May 24, 1939, Verna married Edwin J. Thiel and lived with him on the Thiel family farm owned by Edwin’s parents in the Town of Weyauwega until they purchased and moved to a larger farm in the Town of Lind. She and her husband worked that dairy farm for over 25 years and raised their three children, Carol, Daniel, and William until Edwin’s retirement from farming. Verna remained on the family farm after Edwin’s passing in April of 1987 until 2007 when she sold the property and moved into a newly constructed home in Weyauwega on Guth Road, where she lived out the rest of her days gardening and serving her community in an endless number of ways.

Verna will be most remembered by all for her cheerful demeanor, unending dedication to helping others, and the unlimited thoughtfulness with which she dealt with everyone she encountered and enriched during her long life. She was loved and beloved and will be terribly missed by everyone whose lives she touched. During her time living in the Town of Lind she was an active member of the Lind Center Homemakers, a Lind Center 4-H Club leader teaching cooking classes, a member of the St. Peter Ev. Lutheran Church and the Church Ladies Aid. She also served as Town Treasurer; an election volunteer during all local, state, and federal elections; and as Supervisor of the Cooking/Baking Department for the annual Waupaca County Fair for several years while she lived in Lind Center. After her move to Weyauwega she maintained her Homemaker and Ladies Aid activities and added countless hours of community service support for the local “Meals on Wheels” program and volunteered at the Weyauwega Health Care Center where she assisted with patient activities. She garnered numerous awards for her entries in the Waupaca County Fair in cooking, gardening, and floral exhibits including several Grand Champion Ribbons. Additionally, she received several local, county, and State of Wisconsin certificates of recognition and awards for her volunteer work in the Weyauwega community and was selected as the “Honorary Queen” of the local Weyauwega Horse and Buggy Days celebration in 2013.

Verna was preceded in death by her loving husband, Edwin; her brothers, Lawrence Kapitzke and his wife Judith and Russell Kapitzke and his wife Carol; and son, Daniel. She is survived by her Daughter, Carol (Hanson) and son-in-law Duane; Son William and daughter-in-law (Sherry); daughter-in-law, Suzanne (Daniel’s wife); Lucie Erickson (former Daughter-in-Law); Sister, Karen Peters and her husband, Nathan; brother Glenn Kapitzke and his wife, Shirley; seven Grandchildren; 10 Great Grandchildren; one Great Great Grandchild along with numerous nieces and nephews. Verna was baptized, confirmed, and a life-long communicant member of St. Peter Ev. Lutheran Church in Weyauwega.

The Christian Funeral for Verna will be held on Tuesday, August 31, 2021 at 11:00 am at St. Peter Ev. Lutheran Church, Weyauwega with Rev. Aaron Kristopeit officiating. A private family burial will take place following the service at Oakwood Cemetery, Weyauwega. A visitation will be held on Monday, August 30 at the Cline-Hanson-Dahlke Life Celebration Center in Weyauwega from 4:00-6:00 pm and also at the church on Tuesday from 9:30-10:45 am. Due to Covid-19 concerns, all participants are requested to wear face coverings and practice social distancing protocols both at the celebration center and at the church.

In lieu of flowers, the family respectfully requests memorial donations in Verna’s name to any of the following: American Red Cross, St. Peter Ev. Lutheran Church Ladies Aid, or a charity of your choice.