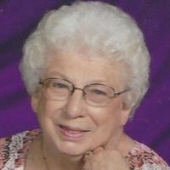 Verlaine Katheryn Fuhs, age 88, of Weyauwega, went to her heavenly home on Thursday, March 5, 2020 at ThedaCare Hospital in Waupaca. Verlaine was born on December 3, 1931 to the late Emil and Alice (Holman) Yonke in the Town of Lanark, WI. She was united in marriage to Everett Fuhs on October 15, 1949. He preceded her in death in 2010. Verlaine was the matriarch to five generations of loving family. She worked at Lakeview Manor as a nursing assistant and also at Ron & Lloyd's Grocery store as a bookkeeper. Verlaine and her husband Everett served as King and Queen of Horse & Buggy Days in October of 2000. She was a member of St. Peter Ev. Lutheran Church and the Ladies Aide in Weyauwega. Verlaine was an avid bowler and participated in many national tournaments. Everett and Verlaine loved to travel and visited all 50 US States and several foreign countries.

The family wishes to thank the staff at Bethany 3rd floor rehabilitation and the ER doctors and nurses at ThedaCare Waupaca, as well as the ICU nurses for making Verlaine's last days as comfortable as possible.