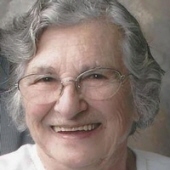 Age 90, of Weyauwega, went to her heavenly home on Monday, January 4, 2016, at Theda Care Medical Center in Waupaca. She was born on April 5, 1925 in Weyauwega, daughter of the late John and Ida (Joch) Hertzfeld. On January 9, 1960, she was united in marriage to Leonard Yorkson. The Lord blessed Vera and Leonard with 7 children. She farmed with Leonard for many years in the Town of Lind. She was a member of St. Peter Ev. Lutheran Church in Weyauwega and their Ladies Aid. Vera was also a member of the Homemakers Club for many years. She enjoyed her involvement in the 4-H, baking and gardening, but especially enjoyed spending time with her grandchildren.

She was preceded in death by her parents, infant son James, 5 sisters-in-law and 4 brothers-in-law, also her father-in-law and mother-in-law, Fred and Christina (Nelson) Yorkson.

To order memorial trees or send flowers to the family in memory of Vera E. Yorkson, please visit our flower store.