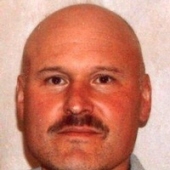 Age 51, of Manawa, went to his heavenly home on Sunday, June 4, 2017. He was born in New London, son of Donald and Annette (Springer) Fahser. Tim attended St. Paul Lutheran Grade School and was Confirmed there in 1981. He graduated from Little Wolf High School in 1985. Tim enjoyed spending time in his garden and loved trout fishing. He was a member of St. Paul Lutheran Church in Manawa.

He is survived by his mother, Annette; siblings: Deidred (Steve) Trumble, Williams Bay, WI; Blake Fahser, Waterloo, WI. He is further survived by aunts, uncles, cousins, other relatives and friends.

He was preceded in death by his father Donald.

A memorial service for Tim will be held at 6 p.m. on Thursday, June 8, 2017 at the Cline-Hanson-Dahlke Funeral Home in Manawa (176 N. Bridge St.) with Rev. Nathan Reichle officiating. A gathering of family and friends will take place at the funeral home on Thursday from 4:00 p.m. until the time of the service.

To order memorial trees or send flowers to the family in memory of Timothy D. Fahser, please visit our flower store.