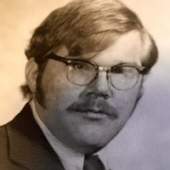 Thomas P. Holmes, 67, passed away peacefully at Crossroads Care Center in Weyauwega on Saturday, January 16, 2016. Tom was born in Minneapolis, MN on May 21, 1948 and grew up in Duluth, MN. The family moved to Wisconsin in 1966 and he graduated from Middleton High School that year. He joined the US Navy in Sept. 1966. He served on two ships as a Radioman, which included four tours of duty in Vietnam. He was honorably discharged from duty in 1970. He attended college at UW Whitewater, earning a Bachelor of Science degree in Social Work in 1974. He completed his Masters Degree in 1979. He worked in the social work field in several counties and later for the State of Wisconsin. He loved to hunt and fish in his spare time. He was married to Janet (Sampson) Holmes and lived near Poy Sippi, where they had many friends.
Tom is survived by is his brother, Lawrence; sister, Signe (Joseph) Perrigoue and beloved nephews, nieces, great nephews, great nieces and many friends.
Tom is preceded in death by his wife, Janet; his father, Carlton; his mother, Inez (Sonquist); his step- mother, Alice (Axelson) and his brother, Robert.
Tom will be buried at Central Wisconsin Veterans Memorial Cemetery in King, WI. A gathering of family and friends will be planned for later this spring.
The family would like to sincerely thank the nurses and all staff at Crossroads Care Center and Optim Healthcare for their exceptional care of our brother for the last several years. He was very happy there

To order memorial trees or send flowers to the family in memory of Thomas P. Holmes, please visit our flower store.