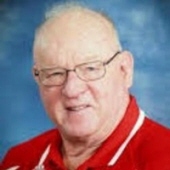 Thomas James Hoffmann, age 81, of Manawa, passed away on Tuesday, October 10, 2017 at ThedaCare Neenah. Tom was born on June 11, 1936 to the late Charles and Virginia (O’Neill) Hoffmann in New London. He graduated from Manawa High School and then went on to graduate from UW Madison. He loved the Badgers! He proudly served his country in the US Army. Tom was united in marriage to Mary A. Loughrin on November 26, 1960. She preceded him in death in 2010. Tom worked for Appleton Papers for 26 years and was on the Manawa Area School District School Board for 30 years. Tom was a lifelong member of Sacred Heart Catholic Church in Manawa.

The Funeral Mass for Tom will be held at 11:00 a.m. on Friday, October 13, 2017 at Sacred Heart Catholic Church in Manawa with Fr. Charles Hoffmann officiating. Burial will be in the parish cemetery. Visitation will take place on Thursday, October 12, 2017 from 4:30-7:30 p.m. at the Thomas J. Hoffmann Gymnasium at the Manawa Elementary School (800 Beech Street), and also at the church on Friday from 9:30 a.m. until the time of the service.

To order memorial trees or send flowers to the family in memory of Thomas J. H, please visit our flower store.