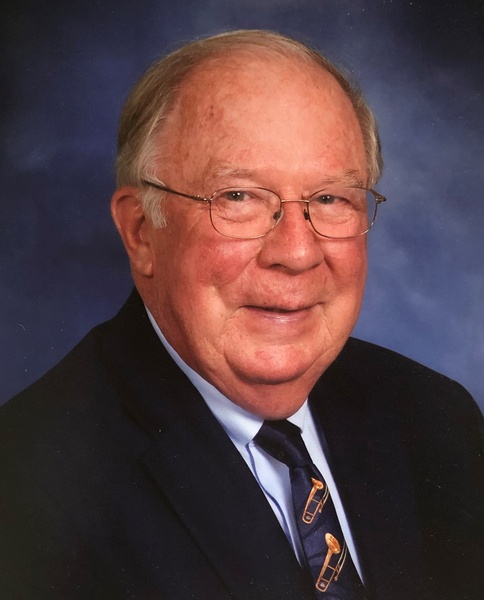 Thomas William Guyton passed away peacefully at Theda Clark Medical Center on July 29, 2022, at the age of 89.

He graduated from Oil City High School in Oil City, Pennsylvania in 1950. He spent his summers during high school painting oil tanks for Quaker State and Pennzoil. Tom proudly attended Grove City College in Pennsylvania. He was a member of the Nu Lambda Phi fraternity and earned a Bachelor of Science degree in business administration in 1954. He served for two years in the United States Army and was stationed in Schweinfurt, Germany and after returning home, married Marilyn Louise Adams on December 15, 1956 in Oil City.

Tom worked in materials management for Cooper Bessemer in both Grove City, Pennsylvania and Mt. Vernon, Ohio prior to taking a position in management and quality control for Jenn-Air Corporation in Indianapolis, Indiana. In 1982, he accepted a position as operations manager for Hortonville Manufacturing Co. in Hortonville, Wisconsin.

On June 23, 1998 Tom married Marlys Behm. They enjoyed escaping the Wisconsin winters for over twenty years in their second home in Fountain Hills, Arizona. One of Tom's favorite pastimes was enjoying the beauty of the desert in the McDowell Mountain Regional Park.

He had a passion for music and in particular playing the trombone. His high school senior yearbook quote was "Music is the thing of the world that I love most." He demonstrated that love throughout his life enjoying many years playing his trombone in church and with the US Army Band, the Neenah and Fountain Hills Community Bands, and the Memory Lane Orchestra.

Tom also was an avid Green Bay Packer and Milwaukee Brewer fan and enjoyed refinishing antique furniture, sailing, golfing, hiking, biking, traveling, picking cherries in Door County and spending time with all of his grandchildren each of whom he was so proud of.

In addition to his parents, he was preceded in death by an infant son, infant twin daughters, and his niece Barbara Burch Dulaney.

A memorial service for Tom will be held on Tuesday, August 16, 2022 at 11:00 am at Immanuel Lutheran Church (W7265 School Rd, Greenville, WI) with Rev. Timothy Dolan officiating. A gathering of family and friends will be held at the church from 9:30 am until 10:45 am.

In lieu of flowers, donations may be made to Immanuel Lutheran Church, The Cystic Fibrosis Foundation, or The American Cancer Society.