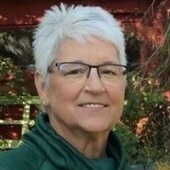 Sheryl “Sherry” Ann Blomberg was welcomed into her Savior’s arms on April 11, 2019, at home surrounded by those she cherished most in her final days, after a battle with cancer.

Sherry grew up on a farm surrounded by her family and lots of cousins. She attended W-F High School, graduating in 1976. After high school, Sherry got married and became a mom to her 3 kids. Sherry worked in Appleton before taking a position at the Waupaca County Courthouse. She worked there for 24 years, retiring after her cancer returned.

Anyone who met Sherry would see her passion for her kids and her family. She would go without if she could give to those she loved; she would go out of her way to help. Sherry could often be found watching over her mom. Sherry enjoyed working on her flowers and refinishing treasures. She could regularly be found talking Al into a new project. Sherry rarely missed a family function or grandkids’ event. If others were to describe Sherry, they might talk about her faith, spunk, quick-wit, and unselfishness. Her determination, strength of will, and counsel were an inspiration to those who had the opportunity to meet her.

One of Sherry’s proudest achievements is that her kids and grandkids have shared her faith. Her wish is that they always remember to keep looking up.

Sherry is preceded in death by Herb Loehrke, and mother-in-law Mary Blomberg.

We will be celebrating Sherry’s life on Monday, April 15 from 4-8 pm at Cline-Hanson-Dahlke Funeral Home in Weyauwega and on Tuesday from 9-10:45 am at Emmaus Lutheran Church, N180 Cty. Rd A, Waupaca, with funeral to follow at 11:00 a.m.