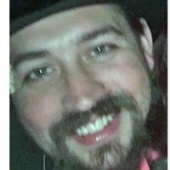 Shane Thomas Beauchamp, age 31, of Manawa, passed away on Saturday, May 4, 2019 due to a motorcycle accident. Shane was born to Shawn and Theresa Beauchamp on February 4, 1988 in San Diego, California. He married Jessica Ploszaj on July 29, 2016, in Perry, Georgia. In 2005, Shane joined the U.S. Army and served as an Information Technology Specialist (25B) and Signal Support Systems Specialist (25U). In Shane’s eight years of service, he served two tours in Iraq and one in Afghanistan. After his time in the service, he went to MMI (Motorcycle Mechanics Institute), Georgia Military College, and worked various jobs. Shane loved to ride both his 2014 Harley Davidson Softail and his late father’s 2007 Harley Davidson Custom Classic. He loved to hunt, go shooting, and playing with his son Jesse.

He was preceded in death by his father Shawn Beauchamp, and grandfather Daniel Thiel.

A memorial service for Shane will be held on Friday, May 10, 2019, at 1:00 p.m. at the Waupaca Christian Church (E2249 King Road, Waupaca) with Rev. Carl Ferguson officiating. Full Military Honors will be held at the church following the service.

In lieu of flowers, donations should be made to the Wounded Warrior Project at: