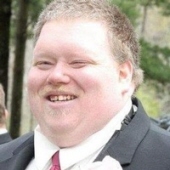 Scott J. Merryfield, age 37, of Weyauwega, passed away on Wednesday, November 28, 2018. He was born on June 2, 1981 in Appleton, Wisconsin, son of Ronald and Betty Jo (Thompson) Merryfield. Scott attended St. Peter Lutheran Grade School in Weyauwega and graduated from Weyauwega-Fremont High School in 1999. He worked various jobs, most recently at the Waupaca Foundry as a security officer. Scott liked to swim, bowl, playing darts and being at the cabin on Pine Lake, Waushara County. He loved his video games especially Minecraft and role playing D & D (Dungeons & Dragons). He is survived by his parents: Ronald and Betty Jo Merryfield; a brother: Keith (Kelly) Merryfield, Weyauwega; nephews and a niece: Kyle and Justin Merryfield, Jeremy and Hayley Merryfield; step- nephews: Brandon and Kyle Kelly; special friend Samantha Hudziak; aunts, uncles, cousins, other relatives and friends. He was preceded in death by his paternal grandparents: Hanford and Ione Merryfield; his maternal grandparents: Joseph and Frances Thompson; his brother Dennis Merryfield; uncle Fred Thompson; aunt Denise Radtke; and step-nephew Danny Kelly. A Celebration of Life service for Scott will be held at the Cline-Hanson-Dahlke Life Celebration Center of Weyauwega on Monday, December 3, 2018 at 11:00 a.m. A gathering of family and friends will be held Sunday evening at the Celebration Center from 4-7 p.m. and on Monday from 10:00 a.m. until the time of the service. Burial will be in Lind Center Cemetery, Town of Lind.

Cline-Hanson-Dahlke -Weyauwega
To order memorial trees or send flowers to the family in memory of Scott J. Merryfield, please visit our flower store.