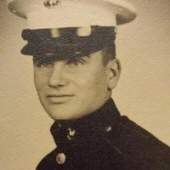 Age 65, of Waupaca, formerly of Manawa, died unexpectedly on Sunday, September 25, 2016. He was born in Iola, son of Clarence and Ruth (Peterson) Handrich. His mother preceded him in death in 1955. Russell grew up in the Manawa area and resided in Waupaca for over 30 years. He proudly served his country with the U.S. Marines in 1969 -1973. He loved football especially the Packers, also the Brewers, walking and shopping. He was loved by everyone that knew him.

He was preceded in death by his mother Ruth and step-mother, Verna.

A memorial service for Russell will be held on Thursday, October 27, 2016 at 11:00 a.m. at Zion Lutheran Church in Caroline, (W12804 County Road M), with Rev. Craig Nehring officiating. Burial will be in the church cemetery. A gathering of family and friends will take place at the church on Thursday from 10:00 a.m. until the time of the service.

To order memorial trees or send flowers to the family in memory of Russell Handrich, please visit our flower store.