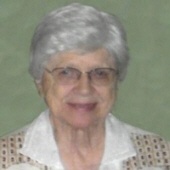 Ruby Anne Piotter, age 93 of Manawa, went peacefully to her heavenly home on Monday, January 28, 2019 at the Manawa Community Nursing Center. Ruby was born in the Town of Union to the late William and Anna (Dallman) Pethke on December 13, 1925. She was united in marriage to Elmer Piotter at Zion Lutheran Church in Manawa on June 25, 1949. He preceded her in death on December 12, 2012. Ruby was a teacher for 42 years before her retirement in 1987. She was a faithful member of Zion Lutheran Church in Manawa.

The Christian funeral for Ruby will be held at 11:00 a.m. on Friday, February 1, 2019 at Zion Lutheran Church in Manawa with Rev. Tedd Lees officiating. Visitation will take place from 9:30 a.m. until the time of the service at the church. Burial will be at Union Cemetery in the Town of Union.