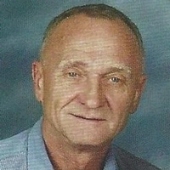 ﻿Age 68, of Weyauwega, passed away unexpectedly of natural causes, on Saturday, November 21, 2015, while doing what he enjoyed most, deer hunting with family and friends. He was born on November 2, 1947 in New London, son of the late Bernard and Evelyn (Bork) Thiel. Ronald enlisted in the U.S. Navy in 1965-1969. In 1970, he moved to Two Rivers and began his work at Point Beach State Forest. In 1971, he married his wife Patricia Boulanger. He continued his work at the State Park where he retired after 37 years of service, and 34 years of service as a Deputy Conservation Warden. Ronald also enlisted in the Army Reserves in 1974, as a heavy artillery trainer in the 84th Training Division “Rail Splitters”. He was deployed during Desert Storm in 1991. He retired from the Army in 1996. He served his country proudly and honorably. After retiring, he and his wife moved back to his home town in Weyauwega and built their home. He was a member of St. Peter Ev. Lutheran Church in Weyauwega.

He was preceded in death by his parents, sister: Darlene Thiel, niece Tammy Littlefield; nephew: LaWayne Littlefield; in laws: Jerome and Vivian Boulanger, aunts and uncles.

Ronald's family would like to extend a special thanks to all the EMT's, firefighters and first responders that came to assist. Also to our close friends Dave and Scott Luebke for all your help and support.

To order memorial trees or send flowers to the family in memory of Ronald E. Thiel, please visit our flower store.