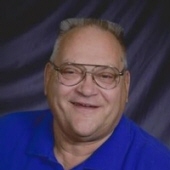 Roger Rueben Much, age 69, of Manawa, went to his heavenly home on Friday, October 6, 2017 at his residence. He was born on October 27, 1947 in the Town of Union, son of the late Alvin and Linda (Braatz) Much. On November 2, 1968, he was united in marriage to Sharon Krueger at St. Paul Lutheran Church in the Town of Dupont, Waupaca County. She preceded him in death in 2009. Roger farmed in the Town of Union. He also worked at Sturms and Sons in Manawa until his retirement. Roger loved fishing, gardening and woodworking. He was a member of Trinity Lutheran Church in Bear Creek.

His parents; wife; brother Duane, and father and mother-in-law, Ervin and Eleanor Krueger preceded him in death.

To order memorial trees or send flowers to the family in memory of Roger R. Much, please visit our flower store.