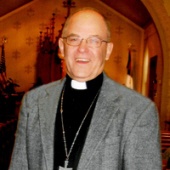 On Friday, December 11, 2020, Roger Nielsen of Iola, WI went to be at home with Jesus, at the age of 79. He passed away peacefully at home surrounded by his family after an almost two-year battle from a rare form of cancer. Roger was born October 13, 1941, to Aage and Lilian (Endres) Nielsen of Beaver Dam, WI. The family later moved to Greenwood WI, where they farmed. Roger graduated from Greenwood High School in 1960. He served in the US Army from 1960 – 1963.

After returning home from, the Army, he was an auto mechanic before he and his wife Alice purchased a dairy farm in rural Greenwood and farmed for 21 years together. After leaving the farm, Roger was an equipment operator for another 21 years for the Central Electric Coop in Iola WI. His most rewarding calling was serving as Pastor for 10 years at St. John’s Lutheran Church, in rural Weyauwega WI. Roger had always known his purpose was to serve the Lord!

Roger enjoyed spending time with his family. In his earlier years, he was an avid baseball/softball player. He also enjoyed hunting, building and flying remote control airplanes, tinkering in his garage, watching sports and so much more. He enjoyed life. He also enjoyed spending time with his church family, leading Bible Studies, and spreading the word of Jesus Christ.

A celebration of life will be held at St. John’s Lutheran Church, N3882 County Rd KK, Weyauwega, WI 54983 at 9:30 AM on Saturday, December 19, 2020. Due to Covid 19, a gathering will not be held before the service. The service will also be broadcast for those in the parking lot of the church via the church’s FM station. For those unable to attend, Roger’s service will be recorded and a link placed on his obituary page on our website. www.clinehansondahlkefuneralhomes.com

In lieu of flowers, any memorials may be made and sent to St. John’s Lutheran Church.