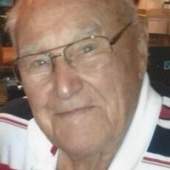 Robert was born May 23, 1923 son of the late Herbert and Evelyn (Lawton) Wegener in Manawa, WI. Bob graduated from Manawa High School and then in 1943 he entered the U.S. Army during World War II, proudly serving in the Pacific Theatre until 1946. He married the late Mildred C. Roloff on November 1, 1947 at Zion Lutheran Church in Manawa. She preceded him in death on September 17, 2010.

Robert went to work for Sturm and Jensen Oil Co. and then A. Sturm and Sons in Manawa where he drove semi-truck, retiring after 39 years on the road. He then worked another 14 years for Quality Concrete in Manawa. He served many years on Manawa Fire Department.

Bob lived a full and very active life. He was proud of his home and yard. He enjoyed working in his shop and he had the ability to fix anything! He enjoyed traveling, hunting and fishing. He had a passion for golfing and he enjoyed many warm weather golf trips with Millie. Bob was an avid snowmobiler and was a long time member of the Manawa Winter Wolves. He was a faithful member of Zion Lutheran Church. He loved spending time with family and friends. He was especially proud of his grandchildren.

A funeral service will be held on Wednesday, November 2, 2016 at 11:00 a.m. at Zion Lutheran Church in Manawa with Rev. John Hielsberg officiating. Family and friends may call at the Cline-Hanson-Dahlke Funeral Home, Manawa, on Tuesday evening from 5 p.m. to 7 p.m. and again at the church one hour prior to the service. Burial will be in the Little Wolf Cemetery, Manawa. Military rites will be held.

In Lieu of flowers a memorial fund has been established at Zion Lutheran Church Ladies Aid.

Thank you to all of Bob’s friends , especially Tom Hoffman, Harry Scheafer, Tom Abraham and Bud Suehs and also to the staff at the Manawa Living Center for their kindness and care shown to Dad.

To order memorial trees or send flowers to the family in memory of Robert Wegener, please visit our flower store.