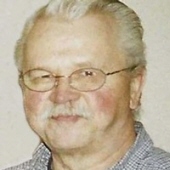 Robert Walter Hermanson, age 68, of Manawa, passed away unexpectedly on Tuesday, March 7, 2017 at Theda Care Medical Center in New London. He was born on November 7, 1948 in Iola, son of the late Cyrus and Minnie (Larsen) Hermanson. On December 21, 1966, he was united in marriage to Myrtle Kimball. In his early years, Bob logged with his father and later farmed with his cousins. Bob also worked as foreman at Flanagan Bros. Kraut Factory in Bear Creek for 17 years. Bob had a passion for hunting and fishing throughout his lifetime. He had an appreciation for the outdoors and sports. He enjoyed cheering on the green and gold. One of Bob’s greatest joys was spending time with his grandson Carter.

He is survived by his wife of 50 years, Myrtle; son Heath Hermanson (Keri); grandson Carter Hermanson and one brother Leeland Hermanson.

He was preceded in death by his parents.

A gathering of family and friends to celebrate Bob’s life will be held at the Cline-Hanson-Dahlke Funeral Home in Manawa on Friday, March 10, 2017, from 4-6p.m.

To order memorial trees or send flowers to the family in memory of Robert W. Hermanson, please visit our flower store.