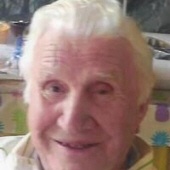 Robert “Bob” Bonikowske, age 93, of Manawa, went to his heavenly home on Friday, September 10, 2021. He was born on September 1, 1928 in the Township of St. Lawrence to the late Elmer and Clara (Gregorious) Bonikowske. Bob was a member of St. Paul’s Lutheran Church in Manawa where he was baptized and confirmed. He graduated high school in 1946 and married Eloyious Schoen on June 23, 1951.

Bob attended vocational school for plumbing and helped his father-in-law for many years while still farming. He hauled milk for Albert Nemmetz and Carl Rineck, and also hauled cattle for Paul Preuss. He tended bar for many years, he may have served you at Wings Inn, Stormin Normans in Big Falls, Conroys at Bear Lake and K&H in Manawa or at Cedar Springs, Manawa. Bob drove school bus for years, was a member of the St. Lawrence Fire Departement, President of the Farm Bureau, a volunteer driver for Waupaca County, helped run the Waupaca County Farm Bureau food stand for years and was also a Lions Club Member. Bob was proud to be a farmer from 1947-1991 and loved to deer hunt, fish, coon and fox hunt and go up north to Dohm’s cottage and Canada.

The funeral service for Bob will be held on Wednesday, September 15, 2021 at 11:00 a.m. at St. Paul Lutheran Church in Manawa with Rev. Nathan Reichle officiating. Burial will be in Little Wolf Cemetery, Town of Little Wolf. A visitation for Bob will be held on Tuesday, September 14, 2021 from 5-7 p.m. at the Cline-Hanson-Dahlke Life Celebration Center of Manawa and on Wednesday at the church from 9:30 a.m. until 10:45 a.m.