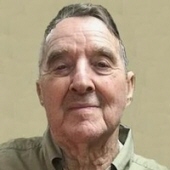 Robert Richard Bartkowiak, age 89, of Appleton, WI, formerly of Fremont, WI, went to his heavenly home on Thursday, April 5, 2018, at Theda Care Regional Medical Center in Appleton, WI. He was born on January 28, 1929, in Kiel, WI, son of the late Benjamin and Hattie (Kowalski) Bartkowiak. On November 4, 1967, he was united in marriage to his second wife, Georgia Parsons. She preceded him in death. Following high school, Robert served his country in the U.S. Army in the Korean War. After returning home from the war, he married Luella Koch and had three children together but later divorced. He was a member of the Maple Street Church of Christ in Waupaca, WI. He is survived by his children Debra Summerlin, of Powder Springs, GA, Danita Metko and husband Gene, of Berlin, WI, Daniel Bartkowiak of Fremont, WI; grandchildren, Nick Scharenbroch, Matt Verhagen, and Karissa Metko. Siblings are Donald Bartkowiak (deceased) of Bancroft, WI, and Jeanette Landowski, of Almond, WI. The funeral service for Robert will be held on Thursday, April 12, 2018, at 11:00 a.m. at the Cline-Hanson-Dahlke Funeral Home in Weyauwega, WI. Burial will be in Oakwood Cemetery, Weyauwega, WI. Visitation for Robert will be held at the funeral home on Thursday from 9:00 a.m. until the time of the service.

To order memorial trees or send flowers to the family in memory of Robert R. Bartkowiak, please visit our flower store.