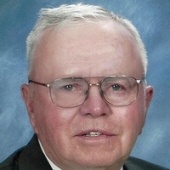 Robert Myron Erickson, age 94, of Weyauwega, went to his heavenly home on Thursday, March 7, 2019, at Crossroads Care Center in Weyauwega. He was born on June 8, 1924, in Iola, son of the late Myron and Mabel (Roe) Erickson. He was baptized and confirmed at Our Savior Lutheran Church in Iola. Robert attended grade school at Trout Creek School, which was located on the Erickson farm. He attended Iola High School graduating in 1942. On September 1, 1951 he was united in marriage to Ruby Regel at Christ Lutheran Church in West Bloomfield. Robert and Ruby farmed in the township of Saxeville in Waushara County until 1998 and then moved to Weyauwega. Robert served as town chairman of Saxeville Township for 12 years, also serving on the Waushara Town Board during this time. While attending grade school at Trout Creek, he would ski to school in the winter. Robert very much enjoyed water and snow skiing. He skied in the Birkebeiner in Hayward several times. He also medaled in Badger State Games at Rib Mountain in downhill skiing. Robert was proud of his Norwegian heritage and was a member of Sons of Norway in Iola. Robert also enjoyed fishing, playing sheepshead and attending his grandchildren's sporting events in track, hockey and football. When they moved to Weyauwega, Robert and Ruby joined St. Peters Ev. Lutheran Church and he served on the finance committee and as a visiting elder.

Besides his parents, he was preceded in death by a baby sister, Ellen Mae and brother, Elmore (Lyla) Erickson.

In lieu of flowers memorial can be directed to St. Peter Ev. Lutheran Church.

The Erickson family wishes to thank the staff at Crossroads Care Center in Weyauwega for their excellent care and concern of Robert.