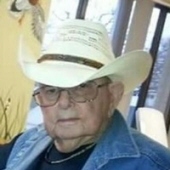 Wilcox, Robert H. Robert Harry Wilcox, "That Old Cowboy", age 85, of Weyauwega, died peacefully on Monday, April 27, 2015, at Theda Clark Medical Center, Neenah with his loving son Todd by his side. He was born on May 29, 1929, Township of Royalton, son of the late Harry and Jeanie (Henry) Wilcox. Robert proudly served his country in the U.S. Army during the Korean Conflict. He acted as a Chauffeur for U.S. Generals in Washington D. C. He also drove bus for Valley Transit in Appleton for over 20 years. He enjoyed meeting and talking to all the people that rode his bus. He had a great passion for horses and was easily recognized by the cowboy hat that he always wore. Bob was quick witted and loved seeing others smile. When asked what he wanted on his headstone Bob always jokingly said "See I told you I was sick." He is survived by his son: Todd (Melanie) Wilcox, Waupaca; Daughter Skeeter (Mark) Abrahamson, Neenah; Son, Josh (Kelly) Much, Appleton; Granddaughter Taylor Wilcox, Waupaca; Grandson Ben Hayes, Michigan; Grandson Max Hayes, Washington; Special friend Ginny Jensen, Weyauwega. Siblings: Glenn Wilcox, Neenah, Eva Bork, Greenville, Dolly Bork, Neenah, Bette Ferg, Waupaca and Linda (Alton) Ponto, Weyauwega. He is further survived by many nieces, nephews, other relatives and friends. He was preceded in death by his parents, 3 sisters, 4 brothers, also brothers in-law and sisters in-law. A memorial service for Bob will be held on Saturday May 2, 2015, at 10:30 a.m. at the Cline & Hanson Funeral home (209 W. Cook St.) in New London with the Rev. Greg Watling officiating. A gathering of family and friends will take place on Saturday directly at the funeral home from 9:30 a.m. until the time of the service. Burial will be at Hobart Cemetery in the Town of Royalton at a later date

To order memorial trees or send flowers to the family in memory of Robert Henry Wilcox, please visit our flower store.