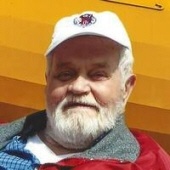 We are saddened to announce the passing of Robert Earl Lard “Bob”, son of Earl and Mary of Pawnee, Illinois, who passed peacefully on Thursday, December 3rd with Cindy, the love of his life for more than 35 years at his side. He was a truly wonderful man – very likable, easy-going and always giving to those he loved. He was a veteran in the Army, loved to fish with his brother, was an avid bowler every Tuesday night back in the day, and had fun snowmobiling with his family and the Invaders Snowmobile Club on the Wolf River.

He and Cindy loved to go to Friday night fish fry and frequented rodeos and fairs; they loved to go out as a couple. Cindy, who refused to be his wife because of his last name (just kidding), was his most cherished sweetheart who stood by him through good times and bad. She made him a better man and made his world a better place.

He lived as a farmer’s son as the oldest of 8 siblings and knew his calling was to become a farmer. He dabbled with crops and other livestock, like his trotter and pacer race horses. He started with handling Simmental and Herford cattle until he grew his passion for Certified Black Angus beef. As an active Cattleman’s Association member, he was a steadfast herdsman as the farming industry was becoming a dying breed, which made him special.

Bob lived on his farm in Fremont for over 50 years, showing his dedication to the life he lived. He worked at DeKalb in sales for many years prior to becoming passionate about cattle. He also created his own business, inventing a new way to trim hooves on cattle. He dropped whatever he was doing to go help local farmers with their tire troubles. But his true passion was being a cow man.

Bob was a very religious man but never imposed that on anyone else because he believed that you should live the life you were meant to live. He taught his family to have faith and that would bring us all through the rough times together. He was loved by Cindy Faskell, his children, Jennifer, John, and Lydia Lard, Michael (Gretchen) and Kellie Faskell, and grandchildren McCalla, Mattie, Mandy, Jill, and Jamie. He had a very special place in his heart for these kids.

Due to Covid restrictions, we plan to memorialize and have a funeral at a date to be determined later. If you wish to contribute to his memory, he supported the Boys & Girls Club in Berlin.

Bob was loved by many, but he will always be known as the cow man at the corner of Metz. We will continue to sing the song from the jukebox in his honor “Who let Bob’s Cow’s out”. He will be remembered and missed by all.

To order memorial trees or send flowers to the family in memory of Robert Earl Lard, please visit our flower store.