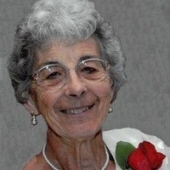 Rita Lorraine (Simonis) Carew, age 86 of Manawa on Thursday, August 3, 2017 has joined her Lord and Savior Jesus Christ and her beloved Donald. She celebrated her victory over Alzheimer’s Disease with her beautiful and much-loved smile exclaiming, “Yay, I’m dancing the Flying Dutchman with Donald!”

Rita was an adoring, loving, faith-filled, strong and gentle wife, mother, grandmother, great grandmother and dear, dear friend. She was born June 17, 1931 in the Town of Rosholt, the daughter of the late Theresa (Dulak) and Jerome Simonis. Rita moved with her parents to Iola in 1942 and to Manawa in 1947. She was active in the Altar Society, serving as secretary for four years. Rita worked at St. Nazianz and Aluminum Goods in Manitowoc, and FSA in Stevens Point. Later the city girl became a great farmer, with her husband and family, slinging bales of hay and driving tractor with the best of them.

Funeral Services will be held at 11 AM on Monday, August 7, 2017 at Sacred Heart Catholic Church in Manawa with Father Xavier Santiago presiding. A visitation for Rita will be held on Sunday, August 6, at Cline Hanson Dahlke Funeral Home in Manawa from 6-8 p.m., and again at the church on Monday at 10 AM until the time of the service. Burial will be in the parish cemetery.

A special thanks to staff and friends at Brookdale of Appleton, Compassus Hospice, and St. Joseph’s Residence of New London and Father Norm Krutzik. The family encourages your support of The Alzheimer’s Association with the hope this pain and suffering ends soon.<iframe id="tukios_player_512x330" allowfullscreen="true" allowtransparency="true" frameborder="0" height="330" scrolling="no" src="https://www.tributeslides.com/videos/embedded_video/JDCSQTHNBL8PKWXP" width="512"></iframe>

To order memorial trees or send flowers to the family in memory of Rita L. Carew, please visit our flower store.