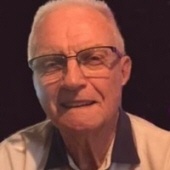 Richard Raymond Wilcox, Sr. was called to his heavenly home on Tuesday, September 3, 2019. He was born May 4, 1930 in Waukesha, Wisconsin to Basil and Alice (Sheets) Wilcox. He was united in marriage to Barbara (Lawrence) Beller on July 13, 1968 and they celebrated 40 years of marriage before her passing on August 30, 2008. He was a loving husband, proud father, grandfather, great-grandfather and a great friend to all who knew him.

Richard enlisted in the United States Army in the 82nd Airborne Division and after serving he received an honorable discharge. He owned a bar called “The Three Reds” along with his father Basil and his brother Gerald. He also worked for Waukesha Dresser as a machinist until his retirement.

Richard’s favorite place was Casey Lake Campground in Waupaca, camping with Barbara and the kids. Casey Lake was a second home for 49 years where grandkids and great grandkids came to visit Grandpa and Grandma Camper and where friends became family. “Little Waukesha” was formed as other family and friends joined us at Casey Lake. He also enjoyed an occasional round of golf, doing word search puzzle books, but most of all being with family and friends.

Funeral services for Richard will be held on Thursday, September 12, 2019 at 11:00 a.m. at St. Mary’s Catholic Church, 225 S. Hartwell Avenue, Waukesha, WI. Visitation will be held at the church on Thursday from 9:00 a.m. until time of service 11:00 a.m. Burial with Military Honors will be in the Highland Memorial Park in New Berlin, WI. A luncheon will be served at the Eagles Club in Waukesha, after burial services.

The family wishes to thank the Manawa Ambulance, EMTs, City of Manawa Police Department and the New London Hospital staff.