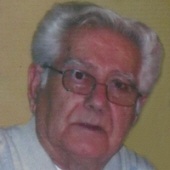 Richard Ortega Morales, age 84 of Waupaca, passed away on Tuesday, November 3, 2020, at ThedaCare Regional Medical Center in Appleton. He was born in Phoenix, Arizona on March 30, 1936, son of the late Francisco and Maria Morales. Following high school, Richard proudly served his country in the US Air Force and also the U.S. Army. On November 13, 1965, he was united in marriage to Eleanor Johnson in Waukegan, Illinois. She preceded him in death on March 22, 2011. Richard and Eleanor lived in Phoenix, Arizona for many years until they moved to Waupaca in 2001 to be with family.

Richard is survived by his children: Brenda (William), Lynn (Rich), Pat “Teet” (Dennis), Bill (Diane), Jerry (Bernice), Gary (Nancy) and Eric (Connie); 17 grandchildren, 28 great-grandchildren. Besides his parents, he was preceded in death by his loving wife Eleanor and grandson, Denny.

Graveside services for Richard will be held on Wednesday, November 11, 2020, at 2:00 pm at the Central Wisconsin Veterans Memorial Cemetery in King with full Military Honors.