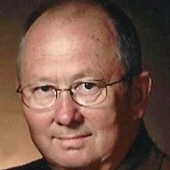 Age 79, of Weyauwega, went to his heavenly home on Monday, December 31, 2018 at Crossroads Care Center in Weyauwega. He was born on July 9, 1939 in Weyauwega, son of the late Alton and Dorothy (Holcombe) Billington. On July 26, 1958 he was united in marriage to Eunice Rae Koplien in Weyauwega at St. Peters Ev. Lutheran Church, of which they are still members. Dick was an avid outdoors man, enjoying hunting and fishing. He was well known for his sense of humor!

Besides his parents, Dick was preceded in death by his son, Brad Billington (1995); his brother, Harold (Davene) Billington and mother and father-in-law, Ed and Dora Koplien.

A memorial service for Richard will be held on Saturday, January 5, 2019 at 11:00 a.m. at St. Peter Ev. Lutheran Church in Weyauwega, with Rev. Aaron Kristopeit officiating. A gathering of family and friends will take place at the church on Saturday from 9:00 a.m. until the time of the service.