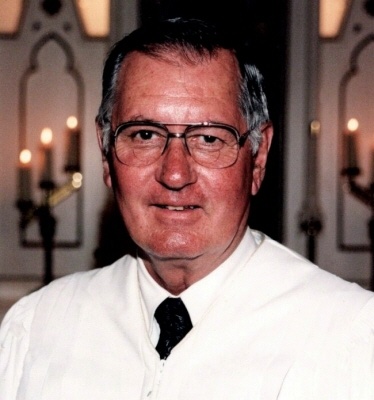 Rev. Leonard Walter Pankow, age 89, went to his heavenly home on Thursday, June 9, 2022 at Monarch Meadows in New London, WI. He was born on September 8, 1932, son of the late Rev. Walter E. Pankow and Mildred R. Pankow (Yerke), in New London, WI. He was baptized by his father, attended Emanuel Lutheran School in New London through the 8th grade, and then attended Northwestern Prep in Watertown, WI, graduating in 1950. He continued his education in Watertown at Northwestern College, graduating in 1954. He then went on to continue his studies in preparation for the ministry at Wisconsin Ev. Lutheran Seminary in Mequon, WI. After his first year at the Seminary, he accepted a call to teach at Fox Valley Lutheran High School in Appleton, WI for the 1955-56 school year, also driving a bus from New London to Appleton daily to transport area high school students.

He then returned to the Seminary to complete his studies in preparation for the public ministry, graduating in 1958. On June 14th of that same year he was joined in marriage to Jeannine R. Thoma. They would have celebrated their 64th anniversary this year.

His first call was to serve as Pastor at Salem Lutheran Church in Lowell, WI. During his residency there, the Pankow family was increased with the birth of their 7 children. After serving at Salem for seven years, he accepted an additional call to serve a congregation nearby, St. Peter Lutheran Church of Oak Grove, WI.

He was involved as a staff member for over 50 years with Camp Bird near Crivitz, WI, a Lutheran Youth Camp that was held each summer, where he truly enjoyed that week in the northwoods.

In August of 2000 he retired from the active ministry and moved back to Weyauwega to be near his family. During retirement he enjoyed gardening with Mom, singing with the St. Peter choir, driving school bus, “tinkering”, fishing, and spending time with his children and grandchildren. For the past two years he has resided along with Mom at Monarch Meadows in New London, WI.

The Christian Funeral for Leonard will be held on Friday, June 17, 2022, at 11:00 am at St. Peter Ev. Lutheran Church, Weyauwega, WI with Rev. Aaron Kristopeit and Rev. Dennis Lemke officiating. Burial will be in Floral Hill Cemetery, New London. Visitation will be held at the church on Friday from 9:00 am until 10:45 am. In lieu of flowers, memorials may be directed to St. Peter Ev. Lutheran Church.

The family wishes to thank the many staff and caregivers at Monarch Meadows for the loving care given to Dad over the last couple of years.
To order memorial trees or send flowers to the family in memory of Rev. Leonard Walter Pankow, please visit our flower store.