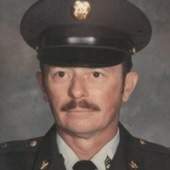 Jim decided to join the Army after graduating from high school in 1959. He served in Germany, Korea, Vietnam and Brussels, Belgium. Jim retired from the United States Army in 1981 as a Master Sergeant after serving 22 years. After his retirement, his family moved from San Antonio, TX to Ogdensburg, WI where he purchased a farmette. Jim held various jobs including Midwest Breeders making farm calls and selling products, Glacier Woods Golf Course in the Pro Shop, Jim Hass Excavating, and drove school bus for the Manawa School District for 22 years. Jim served on the school board for 9 years and was president of the Manawa Men’s Bowling Association for 17 years.

Jim was a Master Mason, joining the Fort Benning, GA Masonic Lodge 579 in Columbus, GA in 1971.

Jim thoroughly enjoyed hunting, fishing, watching Packer games, playing cards and spending time at the Shack, Home of the Worthless Hunters. He was an avid golfer and bowler, participating in many tournaments with the guys.

Jim had numerous military decorations including the National Defense Service Medal and was a qualified expert with the M-1 and M-16 Caliber Rifles.

Jim was preceded in death by his father Harley Bolen and Thomas Murray, husband of his mother, aunt and uncle Betty (Joe) Knott.

Funeral services for Jim will be held on Monday, August 21, 2017 at 1:00 p.m. at the Manawa Masonic Lodge with Rev. Vilas Mazemke officiating. Burial will be in the Ogdensburg Park Cemetery, Full Military Rites will be held. Visitation will be held at the Lodge on Monday from 11:00 a.m. until the time of service.

In lieu of flowers, donations to the Manawa Masonic Home would be appreciated.

The family would like to express its sincere thanks to Heartland Hospice and Iola Assisted Living for the care of Jim.<iframe id="tukios_player_512x330" allowfullscreen="true" allowtransparency="true" frameborder="0" height="330" scrolling="no" src="https://www.tributeslides.com/videos/embedded_video/PYR9QTQ9YJXKX9DC" width="512"></iframe>

To order memorial trees or send flowers to the family in memory of Reuben 'Jim' Bolen, please visit our flower store.