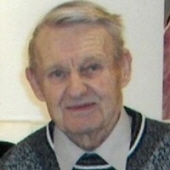 Raymond Earl Nohr, age 89, of Manawa, passed away on Thursday, January 5, 2017 at his residence. Raymond was born on August 6, 1927 to the late Benjamin and Pauline (Sarnowski) Nohr in Waupaca County. Raymond was united in marriage to Carol Joy Abrahamson on July 27, 1974 in New London. He joined the US Navy on August 6, 1945 and after graduating from Waupaca High School, he served in WWII and the Korean Conflict. After his time in the service, Raymond worked as a security guard at the Veteran’s Home in King for nearly 40 years, until his retirement. Raymond enjoyed woodworking, gardening and was an avid Nascar and baseball fan.

Raymond was preceded in death by his parents and three sisters, Betty Patterson, Doris Nohr and Lucille Caves.

A funeral service for Raymond will be at 11:00 a.m. on Tuesday, January 10, 2017 at Cline Hanson Dahlke Funeral Home in Manawa. Rev. Jeffery Fletcher will be officiating. Friends and family may visit at the funeral home from 9:30 a.m. until the time of service. Burial will be in Little Wolf Cemetery, Town of Little Wolf. In lieu of flowers a memorial fund has been established.

To order memorial trees or send flowers to the family in memory of Raymond Earl Nohr, please visit our flower store.