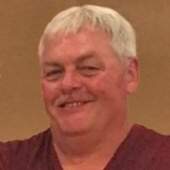 Paul James Ploetz, age 54, of Weyauwega, passed away on Friday, December 8, 2017 at home surrounded by his family. Paul was born on November 29, 1963 to James and Elaine (Zeinert) Ploetz in Waupaca. He lived in Weyauwega most of his life, where he attended Weyauwega-Fremont high School and worked at Presto Products for 36 years. Paul’s hobbies included fishing, hunting and most recently golf. However, his greatest pride and joy were his daughter Keri Ploetz and granddaughter Ava Green.

Paul was preceded in death by his grandparents, Walter and Elaine (Severtson) Ploetz and Alfred and Ella (Herzfeldt) Zeinert and uncles, Kenneth and Eugene Zeinert.

A memorial service for Paul will be held at 11:30 a.m. on Wednesday, December 13, 2017 at St. John’s Lutheran Church (N3925 Cty. Rd. KK) in Baldwins Mill. Rev. Roger Nielsen will be officiating. A gathering of family and friends will take place on Tuesday, December 12, 2017 from 4-7 p.m. at the Cline Hanson Dahlke Funeral Home in Weyauwega, and also on Wednesday at the church from 10:30 a.m. until the time of the service. Burial will be in Oakwood Cemetery in Weyauwega.

To order memorial trees or send flowers to the family in memory of Paul Ploetz, please visit our flower store.