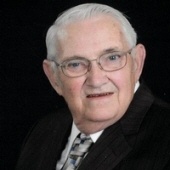 Paul Junior Gehrke died peacefully on May 8, 2019 at St. Joseph Residence, New London, WI. He was 87. Paul was born on November 26, 1931 in Waupaca County to his parents, Mary Barden and Paul A. Gehrke. In 1950, he graduated from Manawa High School as the senior class vice president and state competitor in voice. Three days after high school he joined the United States Air Force where he served for four years. He married Marie Carew in 1955, they raised six children and shared 64 years of marriage together. The Gehrkes lived in Manawa while Paul worked at the Neenah Foundry for 30 years and retired in 1993. He then worked at the Manawa Library for 20 years.

He was preceded in death by his parents Paul and Mary Gehrke, his son Gary Gehrke and sister Ruth Marquardt Wanless.

In lieu of flowers a memorial fund is being established.

The family would like to thank the RNs, CNAs, physical therapists and all the staff at St. Joseph's Residence for the excellent care and sincerity Paul received.