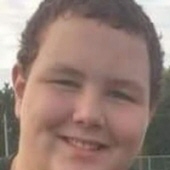 Patrick Edward Runge, age 14, of Weyauwega, passed away unexpectedly at his home on Tuesday, September 19, 2017. Patrick was born in Green Bay on April 3, 2003 at Aurora Hospital. He attended Weyauwega-Fremont High School. Patrick enjoyed spending most of his time with family and friends. Other interests include playing video games, swimming, cooking, music, rapping, farm life and watching the Pittsburgh Steelers.

A gathering of family and friends to celebrate Patrick's life will be held on Saturday, September 23, 2017, from 1-4 p.m. at the Cline-Hanson-Dahlke Funeral Home in Weyauwega. Memorial donations may be made to Patrick's family.

To order memorial trees or send flowers to the family in memory of Patrick E. Runge, please visit our flower store.