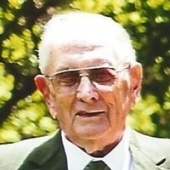 Otto B. Hodel, age 95, of Manawa, passed away on Thursday, February 7, 2019. He was born on April 4, 1923 in Naperville, Illinois, son of the late William and Emma Hodel. Otto attended schools in Naperville, Illinois. He was then drafted in the U.S. Army during World War II on February 18, 1943, serving with the 3406th Ordinance, 7th Army, obtaining the rank of T5. He was honorably discharged in January 1946. After proudly serving his country, he worked for Hass & Getz Plumbing in Naperville where he obtained his Master Plumber’s license. He was also the Plumbing Inspector for the City of Naperville. In 1963, he bought the True Value Hardware Store in Manawa and owned and operated the store until 1978. During that time, he also owned and operated Hodel’s Plumbing & Heating in Manawa where he continued to work until his early 90’s where he finally said “it’s time for me to retire”.

Besides his parents, he was preceded in death by his siblings: Louis, Ernie, Fred “Fritz”, Arnie, Rose, Irma and Barb.

Following Otto’s wish, private family services will be held. The family would like to thank the staff at the Manawa Community Nursing Center for their care and concern of Otto.

To order memorial trees or send flowers to the family in memory of Otto B. Hodel, please visit our flower store.