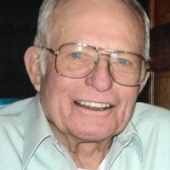 Orville G. Riske, age 88, Clintonville, passed away peacefully at his home on Thursday, March 9, 2017. He was born May 2, 1928, in the Town of Union, son of the late Ernest and Elsie Riske. Orville gave the term “Live Life to the Fullest” a whole new meaning and always made you smile. He retired as a 2nd generation dairy farmer on the family farm. Orville was a fire warden most of his life, he loved nature and being outdoors. Hunting, fishing, trapping and camping were some of his favorite hobbies. An easy way to bribe him and grandma out of the house was to offer to drive them for brunch and a pit stop to the casino. He enjoyed traveling and passing down the traditions of hunting to his grandchildren.

Funeral services for Orville will be held on Monday, March 13, 2017, at 11:00 a.m. at St. Mark Lutheran Church, Symco, with Rev. Jeffrey Smiles officiating. Visitation will be held at the Cline-Hanson-Dahlke Funeral Home in Manawa on Sunday from 1-4 p.m. and also at the church on Monday from 10:00 a.m. until the time of service. Burial will be in the Union Cemetery, Symco.

The family wants to extend deep gratitude to everyone keeping Orville in their thoughts and prayers.

To order memorial trees or send flowers to the family in memory of Orville G. Riske, please visit our flower store.