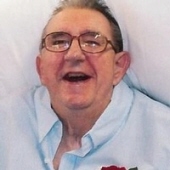 Norbert John Thebo, age 73, of Weyauwega, passed away on Saturday, January 23, 2016. Norbert was born on the family farm in Bear Creek, WI on December 16, 1942, to the late James and Mary Ann (Dolan) Thebo. He was united in marriage to Karen Phillips on May 2, 1964. Norbert graduated from Bear Creek High School in May of 1962. He worked on the home farm after graduation and moved to Berlin, where he was employed at Standard Kollsman Industries on Oregon St. Norbert worked on T.V. assembly products and later was promoted to assistant foreman under Bill Stegeman. After the plant closed in 1969, Norb had a job at Walter Jantz Gas Station and worked part-time at Berlin Chappman Foundry in the shipping and receiving office. Norb moved back to Bear Creek with his wife and family and worked as a custodian at Bear Creek schools, Simmons Company in New London, Marion Plywood Corp. and the last employment was at Clintonville Products. Due to health reasons, Norb had to retire at the age of 60. In March, 2005, Norb and his wife moved to Weyauwega, to be close to his 3 special grandchildren.

Funeral services will be held at 11:00 a.m. on Wednesday, January 27, 2016 at St. Mary’s Catholic Church in Bear Creek. Visitation will be from 9:30 a.m. until the time of service at the church. Father Jack Mullarkey and Parish Director Lincoln Wood will be officiating. Burial will be in the parish cemetery.

To order memorial trees or send flowers to the family in memory of Norbert J. Thebo, please visit our flower store.