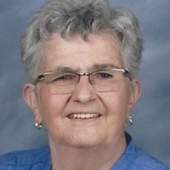 Nancy Jane Preuss Age 83, of Weyauwega, went to her heavenly home on Saturday, November 7, 2015 at the Crossroads Care Center of Weyauwega. She was born on January 14, 1932 in Waupaca. On June 9, 1951,she was united in marriage to Merlin Preuss. He preceded her in death in 2001. She worked at Lakeview Manor in Weyauwega for over 40 years. Following her retirement, she volunteered at numerous places. She was a member of St. Peter Ev. Lutheran Church in Weyauwega. She is survived by her children: William Preuss, Sheridah (Kenneth) Bartol, Dot Preuss; 2 granddaughters: Carly (Josh) Schroeder, Erin (Jason) Wait; 5 great-grandchildren. A memorial service for Nancy will be held on Saturday, November 14, 2015 at 1:30 p.m. at the Cline-Hanson-Dahlke Funeral Home in Weyauwega with Rev. Newlin Schafer officiating. Burial will be in Oakwood Cemetery in Weyauwega. A gathering of family and friends will take place from 12:30 p.m. Saturday at the funeral home until the time of the service. A special thank you to all of Nancy's friends who visited her at Crossroads, and also the staff there for their wonderful care of Nancy during her stay there.

To order memorial trees or send flowers to the family in memory of Nancy Preuss, please visit our flower store.