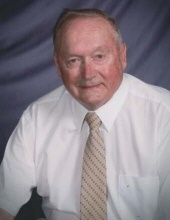 Merlyn L Prahl, age 94, of Weyauwega, passed away on Thursday, November 4, 2021 at St. Joseph Residence, New London. Merlyn was born on August 22, 1927 in Oshkosh, to the late Emil and Ethel (Cady) Prahl, the second oldest of seven children. He was united in marriage to Joyce Gilbertson on January 27, 1951. They celebrated their 70th wedding anniversary this past January.
He attended St. Peter Lutheran Grade School, Weyauwega, and was confirmed in 1941. He graduated from Weyauwega High School in 1945 and served in the US Army from 1945 to 1947. Upon returning to the Weyauwega area, he was employed at Nestle Milk Co. until 1949. He was then employed at the Marathon Corporation, American Can Co., and James River Corporation, where he retired after 38 years. He was a lithographic printing shift supervisor for 25 years. He spent his last 8 years with James River Corp as a lithographic printing specialist for 7 plants across the country. In addition to his full-time job, Merlyn was also a hobby farmer, raising beef cattle on their 35 acre farm. With the help of his wife, Merlyn planted a large garden every year. He also enjoyed dancing to classic polka and waltz music with Joyce.
Merlyn was a lifelong member of St. Peter Ev. Lutheran Church where he served as a visiting elder, deacon and treasurer, as well as assisting with money counting for over 30 years. He was active in the American Legion for 40 years and the White Lake Aeration Club for 50 years. He also was active in the church dartball league and Senior Citizen Nutrition Program. He enjoyed hunting and fishing most of his adult life.
Survivors are his wife, Joyce (nee Gilbertson); three sons: Terrence (Jean) Prahl of Madison, WI; Michael (Laurie) Prahl of Cornell, WI, Robert (Liane) Prahl of Fremont, WI; grandchildren: Jason (Nikki) Prahl, and their children Ava and Brennan of Boyd, WI; Jeremy (Rebecca) Prahl, and their children Isabelle and Nolan of Hudson, WI; Eric (Chantal Forthun) Prahl of Cloverdale, CA; Lili Prahl of Santa Barbara, CA; Garrett (Samantha) Prahl of Brooklyn Park, MN; Allison Prahl (David Olson) of Green Bay, WI; siblings: Carol Vogel of Barefoot Bay, FL, Bonnie (Keith) Schoenick of Leesburg, FL, Dennis Prahl of Appleton, WI, Merrold (Mary) Prahl of Waupaca, WI and many beloved nieces, nephews and friends.
Merlyn was preceded in death by his parents, daughter Kathleen; sisters Norma Drobnick and Geraldine Hecht; brother-in-laws, George Vogel, Louis Drobnick, Joseph Hecht, Nathan Gilbertson, Duane Gilbertson; sister-in-laws Nancy Prahl, Janet Kriese and Elaine Hofacker.
The Christian Funeral for Merlyn will be held at 11:30 am on Wednesday, November 10, 2021, at St. Peter Evangelical Lutheran Church, Weyauwega, with Rev. Aaron Kristopeit officiating. A visitation will be held preceding the service at the church from 9:30am. until 11:15am. Burial will be at Oakwood Cemetery, Weyauwega immediately following the service.
A special thank you to Theda Care Hospice nurses, and also the staff at St. Joseph for their loving care and assistance of Merlyn these last few weeks.
To order memorial trees or send flowers to the family in memory of Merlyn L. Prahl, please visit our flower store.