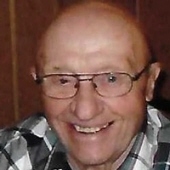 A tribute to a husband, father, uncle, grandfather, and a friend to so many. Melvin Robert Handrich, age 96, resided in Weyauwega, Wisconsin. Melvin went to his heavenly home on Thursday, September 27, 2018, at Crossroads Care Center in Weyauwega, surrounded with family sharing their ongoing love for him after a short illness. Mel was born on May 17, 1922 in Manawa, Wisconsin. He was the son of the late Paul and Elsie (Gobbs) Handrich. He had one brother and one sister. Melvin grew up as a farm boy and at a young age knew the hard work to run a farm. When Melvin wasn’t on a tractor, he had a love of the outdoors, enjoying fishing and hunting. You could find him on a trout stream, a skiff, spearing red horse on the Little Wolf River. He and the Fenske boys and Erma could be found ice fishing on any given day on the Manawa Mill Pond. The fall season was hunting for ducks, geese, and other small game with his faithful dog, Rex. He trapped during the winter on Fenske’s lake and deer hunting every fall. He helped fill Emil Fenske’s walk in freezer every month of the year. He and Erma ice skated every winter on the Fenske pond and that is where they taught many other neighbor hood children to skate. He and Erma had huge gardens and acres of dill pickles. Friday nights were watching boxing matches on the black and white TV, and Sunday nights he took his family to the A&W Root Beer Stand for an ice cream cone, while he smoked his cigar. Melvin was in school through 8th grade and then became a full time farmer, providing food for our boys in World War II. Melvin married Erma Fenske on October 2, 1943. He was a wonderful father, husband, uncle, and grandfather. Melvin was a self taught mechanic, welder and carpenter. Places he worked: Sturms of Manawa, Barnamatic Trailet, Marion Auto Body Works, Kimberly Clark and Presto Products. After selling the family farm he and his family moved to Weyauwega, Wisconsin and purchased a hobby farm on White Lake. This would be their retirement home and where they started a wild game farm and a furniture strip shop. Melvin’s community involvement was the church council, volunteer fireman, archery club, White Lake Conservation Club and numerous others. Mel and Erma hosted many wild game feeds. They had huge gardens, fruit trees, and berry bushes along with raising steers, chickens, ducks, and geese to be butchered and sold to customers. During the winter you could find him at the Fenske home playing sheephead with Emil and the boys. You would find Mel and Erma at every polka dance there was with friends and family. Mel and Erma enjoyed owning a cabin in the North Woods of Wisconsin, where they enjoyed snowmobiling. They loved taking many hunting and fishing trips out west; some with his son Wayne and his cousins, the Gobbs; also other family and friends. Melvin and Erma shared their love of their Lord and Savior knowing when they were to be called home it would be a day of celebration. Melvin is survived by his daughter, Sharon Lee Handrich (Russell Larsen) Fremont, WI and son Wayne Melvin Handrich and his wife Nancy, Park Falls, WI; special nephew Dennis Handrich, Weyauwega, WI; also many grandchildren, nieces and nephews. Melvin is preceded in death by a great grandchild infant Tara Thontlin, special niece Malou Handrich, brother Robert, sister Inez Tellock, and his parents Paul and Elsie Handrich. Thank you to: Pastor Roger Nielson, the staff at Crossroads Weyauwega, Wisconsin; St. John’s Lutheran Church, Cline-Hanson-Dahlke Funeral Home, Weyauwega, Wisconsin; friends and family caregivers, Lori Wilkey, Karen Williams, Sandy Rosenau, Beau Larsen and Nikki Kautz. Melvin’s final message to all of us would be: God is great all the time. The funeral service for Melvin will be held on Sunday, October 7, 2018 at 4:00pm at St. John Lutheran Church Baldwin’s Mill (N3882 County Highway KK, Weyauwega). Rev. Roger Nielsen will officiate. A visitation for Melvin will be held at the church on Sunday from 2:00pm until 3:45pm.