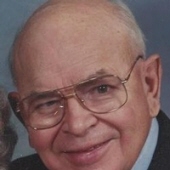 Age 86, of Manawa, went to his heavenly home on Wednesday, August 26, 2015. He was born on February 8, 1929 in the Town of Union, Waupaca County, son of the late William and Anna (Dallman) Pethke Sr. Mel graduated from Little Wolf High School in 1946. On June 17, 1950, he was united in marriage to Rosetta Phelps at the Iola Methodist Church. She preceded him in death on November 14, 2008. He then worked for Herman Dretzke and that led to him working with Carl Dretzke at Farmway Company, then later Berg Corporation until 1988. In 1988, he along with his son Steve, started his own business - Pet-Key Enterprises. Mel was on the Manawa City Council for 13 years and also served as Mayor from 1977-1985. He was active in the Manawa Lion's Club and served as their District Governor from 1969-1970. He was a member of Zion Lutheran Church in Manawa where he served on various offices over the years. He enjoyed traveling with his wife. Mel was a very hardworking, generous and loving husband, father, grandfather, and great-grandfather. He is survived by his children: Ruth (Dan) Hanson, Sharon (Mark) Seeger, Steve (Tammy) Pethke; grandchildren: Matt (Jenny) Buchholz, Christy (Tim) Waldorf, Beth (Lee) Brendemuehl, Tom (Bridget) Seeger, Joe (Erin) Seeger, Jesse (Tasha) Seeger, Zachary and Megan Pethke; great-grandchildren: Jack and Hank Seeger, Mason and Lilah Waldorf, Rylee and Adela Brendemuehl, Dominic Schuelke, Alayna, Beau and Boone Seeger; siblings: Ruby Piotter, Arthur (Ardella), Walter (Elaine), Marvin (June); brother-in-law Clarence Riddle. He is further survived by nieces, nephews, other relatives and friends. Besides his parents and wife, he was preceded in death by his mother and father-in-law: Earl and Eva Phelps; siblings: Edwin (Rene) Pethke, Erwin Pethke, William Pethke Jr. (Lucille), Edna Riddle and Alvin (Alice) Pethke; also a brother-in-law Elmer Piotter. The funeral service for Mel will be held on Monday, August 31, 2015 at 11:00 a.m. at Zion Lutheran Church in Manawa with Rev. Tom Theama and Rev. Vilas Mazemke officiating. Burial will be in Little Wolf Cemetery, Town of Little Wolf. A visitation for Mel will be held on Sunday, August 30, 2015 at the Cline-Hanson-Dahlke Funeral Home in Manawa from 1-4 p.m. and on Monday at the church from 10:00 a.m. until the time of the service.

To order memorial trees or send flowers to the family in memory of Melvin E. Pethke, please visit our flower store.