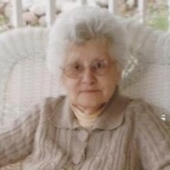 Mary Kathleen Rohde, age 94, was welcomed into glory and rejoiced when she met her Lord and Savior and was reunited with her beloved Leonard on Monday, September 11, 2017 at St. Joseph Residence in New London. Mary was born on October 4, 1922 in Appleton to the late William and Helen (McDaniel) Randerson. She was united in marriage to Leonard M. Rohde on July 27, 1946. He preceded her in death. Mary became a school teacher after graduating from Oshkosh State Teacher's College and retired from teaching to become a “super mom” for 6 children. Mary and Leonard moved to Weyauwega in 1949 and Mary lived there until 2013, when she moved to Trinity Terrace in New London. Mary was a member of St. Peter & Paul Catholic Church in Weyauwega. Mary had a special love for many things. These included her family, her church, books, dancing with Leonard and Prolife activities.

Mary was preceded in death by her parents; husband; brother, Donald Randerson and grandson, Jesse Rohde.

A Mass of Christian Burial will be at 11:00 a.m. on Friday, September 15, 2017 at Ss. Peter & Paul Catholic Church in Weyauwega. Fr. Xavier Santiago will be officiating. Visitation will take place at the church from 9:00 a.m. until the time of the service. Burial will be in the Oakwood Cemetery in Weyauwega.
The family would like to extend a special thank you to the staff at Trinity Terrace and St. Joseph Residence in New London and a special friend Mary Kolz for their care and concern for Mary.

To order memorial trees or send flowers to the family in memory of Mary K. Rohde, please visit our flower store.