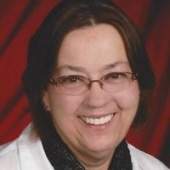 Mary Beth Hallman, age 59, Town of Lind, went to her heavenly home on Monday, November 7, 2016 at ThedaCare Regional Medical Center in Appleton, due to chronic health issues. Mary was born on August 18, 1957, in New London, daughter of Ruben and Arwyn (Olson) Poppe. Mary graduated from Clintonville High School in 1976 and went on to receive her CNA license. She worked for several years as a CNA. Mary also worked at Presto Products for 20 years and then in the field of home health care. In 2008, she was united in marriage to Arthur Hallman Sr.. Mary enjoyed riding motorcycle and was a member of the Harley Classic Riders. She also enjoyed knitting. Mary was a member of St. Peter Ev. Lutheran Church.

Mary was preceded in death by her father, Ruben Poppe; grandparents, Herbert and Irma Poppe and Chris and Doris Olson; aunts and uncles, including special aunt, Arleen Poppe and also her former husband, Michael Zimmerman.

The Christian Funeral for Mary will be held at 11:00 a.m. on Saturday, November 12, 2016 at St. Peter Ev. Lutheran Church in Weyauwega with Rev. Dennis Lemke and Rev. Newlin Schafer officiating. Burial will be in Lind Center Cemetery, Town of Lind. A visitation for Mary will be held at the Cline-Hanson-Dahlke Funeral Home in Weyauwega on Friday, November 11, 2016 from 4-7 p.m. and again on Saturday at the church from 9:30 a.m. until the time of the service.

In lieu of flowers, memorials can be directed to St. Peter Ev. Lutheran School.

To order memorial trees or send flowers to the family in memory of Mary Beth Hallman, please visit our flower store.