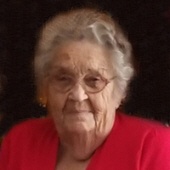 Mary Ann (Gough) Gorman, age, 88, of Iola, formerly of Manawa, was called home to Jesus on Wednesday, October 21, 2020 surrounded by her children and their spouses. Mary Ann was born on February 19, 1932, in Sugar Bush, daughter of the late George and Mary (Lorge) Gough. She graduated in 1950 from Washington High School in New London. She was united in marriage to James Gorman of Manawa on October 8, 1952. They shared 63 years together until his death on July 18, 2015. Mary Ann worked hard on the family farm until her retirement in 1987. She was known for her love of canning, baking, gardening and always there to lend a helping hand. She enjoyed her time being a 4-H Leader. For the past four years, she lived with her daughter and son-in-law, Kate and Jack in Iola until the time of her death. She was a member of St. Patrick’s Catholic Church in the Town of Lebanon and an honorary member of their Altar Society. Mary Ann was great lady and will be missed by those who loved her so dearly.

Besides her parents and husband, she was preceded in death by her son Bill, grandson Nicholas Chambers; sisters Kathleen Lorge and Helen Oaschgar; also brothers-in-law and sisters-in-law.

Due to Covid -19, a private family Funeral Mass will be held at St. Patrick’s Catholic Church in the Town of Lebanon. Burial will be in the parish cemetery.

To order memorial trees or send flowers to the family in memory of Mary Ann Gorman, please visit our flower store.