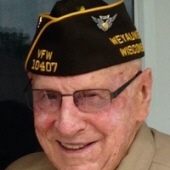 Marvin (Bud) E. Schoenick, age 93, of Weyauwega, went to heaven on Friday, September 6, 2019 surrounded by his family. He was born on May 3, 1926 in Elgin, Illinois, son of the late Doc and Ardice (Potratz) Schoenick. On April 7, 1945, he married Bernice Kuehl in Corpus Christi, Texas. They were married for 68 years before Bernice went to heaven in 2013. Marvin and Bernice farmed for 42 years in the Town of Lind and Marvin worked for the school district of Weyauwega-Fremont for over 25 years. Marvin proudly served his country in the U.S. Navy during WWII and then re-enlisted during the Korean War. Marvin was a member of the Legion Post 176 and the VFW Post 10407. Aside from his children, farming was his greatest sense of pride and accomplishment in his life. Marvin was also an avid blood donor and donated countless gallons over the years to give back to his community (and he also enjoyed the cookies and company).

Marvin loved visits from his family, time at the auction house, playing cards and cribbage, doing cross word puzzles, traveling with Bernice, and he shared many stories about his life. Marvin's stories will forever be held close in the hearts of those who shared his love. Marvin leaves a legacy of hard work, a strong sense of determinism, a witty sense of humor and sarcasm and a love that continued to grow over time.

Besides his parents and wife, Marvin was preceded in death by his sons Tracy and Bobby, and two grandchildren, Stacey and Marsha.

Funeral services will be held on Tuesday, September 10, 2019 at 11:00 a.m. at the Cline-Hanson-Dahlke Funeral Home in Weyauwega with Chaplain Rich Engle officiating. Burial will be in Oakwood Cemetery, Weyauwega. A visitation for Marvin will be held at the funeral home on Tuesday from 9:00 a.m. until the time of the service. In lieu of flowers, please make memorials to the American Legion Post 176 or VFW Post 10407.

Cline-Hanson-Dahlke -Weyauwega
To order memorial trees or send flowers to the family in memory of Marvin Schoenick, please visit our flower store.